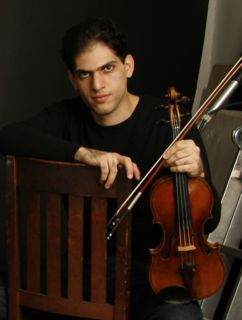 Praised as the “crème de la crème” on National Public Radio’s “Performance Today,” violinist Cyrus Beroukhim has received international recognition as a soloist, recitalist, and chamber musician. His recent performances of Bach and Vivaldi Concerti with the Academy of St. Martin in the Fields were heralded as “flawless and sensitive” by the Zeitung im Espace Mittelland (Switzerland). He has appeared at major venues worldwide including Novell Hall in Taipei, Theaterplatz and Paul Klee Zentrum in Bern, Lobero Theatre in Santa Barbara, Kravis center in Palm Beach, The Barns at Wolf Trap in Washington D.C., Qualcomm Hall in San Diego, Ravinia Festival in Chicago, and various halls throughout Japan, Germany, Luxembourg, and Israel.

Currently based in New York City, Mr. Beroukhim is a member of Fountain Ensemble, Manhattan Sinfonietta, America’s Dream Chamber Artists, and the Zukofsky Quartet, currently in residence at Bargemusic. In November 2008, the quartet presented the complete Milton Babbitt cycle at Columbia University’s “Composer’s Portraits” series and the University of Chicago’s “Contempo” series. Mr. Beroukhim also enjoys exploring the music of other living composers, and has premiered works by Jonathan Dawe, Noel Zahler, and Joshua Fineberg, among others. He has recorded numerous records for Vanguard Classics, Arabesque, Furious Artisans, Aeon, and New World Records, and has been broadcast live on NPR, WQXR 96.3 (New York), and K-Mozart (Los Angeles). As an established musical leader, he currently serves as concertmaster of the New York Symphonic Ensemble, Sympho Orchestra, and the Barbad Chamber Orchestra.

Born in Milwaukee, Wisconsin from Iranian descent, Mr. Beroukhim began his violin studies at the age of two. His early musical training was nurtured by Mimi Zweig and culminated in a successful debut with the Milwaukee Symphony Orchestra at age 15. He pursued his undergraduate degree at the Oberlin Conservatory under Roland and Almita Vamos, and went on to receive his Master of Music degree at The Juilliard School, where he studied with Cho-Liang Lin. In May 2007, he received his Doctorate of Music from The Juilliard School as a C.V. Starr Foundation Fellow.