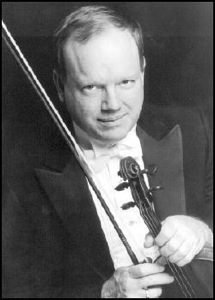 Internationally acclaimed violinist GREGORY FULKERSON has had a flourishing career in both classical and contemporary music. It was as a major exponent of American contemporary music that Mr. Fulkerson rose to prominence, taking the First Prize in the International American Music Competition sponsored by the Rockefeller Foundation and the Kennedy Center (now sponsored by Carnegie Hall). As a result of that victory, Mr. Fulkerson began a very active performing career which included debuts in New York, London, Paris, Rome, and Brussels. He has performed over 30 concerti with orchesrtra, including the World Premieres of the John Becker Concerto with the Chattanooga Symphony, the Richard Wernick Concerto with the Philadelphia Orchestra, and the Roy Harris Concerto with the North Carolina Symphony (later performing and recording it with The Louisville Orchestra). Among the conductors under whose baton Mr. Fulkerson has played are Riccardo Muti, Zdenek Macal, Geoffrey Simon, Bernard Rubenstein, Lawrence Leighton Smith, Gerhardt Zimmermann, Robert Spano, and Marin Alsop. He performed the title role in the 1992 revival of the Philip Glass opera, EINSTEIN ON THE BEACH, for a total of 48 performances on four continents, and later recorded the work for Nonesuch.

Gregory Fulkerson was born in Iowa City, Iowa. He studied at Oberlin College and at The Juilliard School, where his teachers included Paul Kling, David Cerone, Robert Mann, Ivan Galamian, and Dorothy DeLay. His debut recording (on New World Records) was chosen one of the year’s best by The New York Times, and his recording of the complete Violin Sonatas of Charles Ives (on Bridge Records) has become the standard for that repertoire; other Bridge recordings include the complete Sonatas and Partitas for Solo Violin by J.S. Bach (chosen one of the Best CDs of 2000 by The New Yorker magazine) and the Stephen Jaffe Violin Concerto.