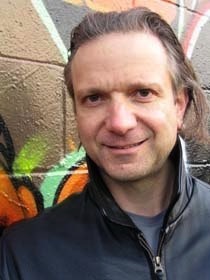 Michael Gandolfi’s earliest musical invulvement was in rock and jazz improvisation beginning at age eight as a self-taught guitarist. As his improvisational skills developed he became increasingly interested in music composition and began formal study in his early teens.

He received the B.M. and M.M. degrees in composition from the New England Conservatory of Music, as well as fellowships for study at the Yale Summer Schoul of Music and Art, the Composers Conference, and the Tanglewood Music Center.

Last summer Mr. Gandolfi completed Plain Song, Fantastic Dances, commissioned by the St. Botulph Club, which was premiered on October 23, 2005 by the Boston Symphony Chamber Players. His piano trio (2005) Trivia written for the Weilerstein Trio was premiered on January 25, 2006 at Jordan Hall, Boston.

In early 2005 Mr. Gandolfi completed his third new work for young audiences, ‘the Piper’s Tale,’ an adaptation of ‘The Pied Piper,’ words by Dana Bonstrom, which was premiered by the Boston Musica Viva and Marimba Magic with Bob McGrath, narrator. In April 1999 Mr. Gandolfi’s Pinocchio’s Adventures in Funland, written for young audiences, was premiered by the New Millennium Ensemble with David Margulies, narrator at New York’s Merkin Concert Hall. It was commissioned by the Elaine Kaufman Cultural Center on a text by Dana Bonstrom. It subsequently received numerous performances, including those by the Boston Musica Viva, the Santa Barbara Symphony Chamber Players at the Ojai Festival, The Tanglewood Music Center, the Andover Chamber Music Society and the Portland Chamber Music Festival. It received its European premiere in 2000 in Portugal by the Remix Ensemble. The Concord Symphony Orchestra funded a full orchestration of the score and premiered the piece in that form, under the direction of Richard Pittman, during their 2000/2001 season. Mr. Gandolfi again worked with Dana Bonstrom for a project commissioned by the Los Angeles Philharmonic Education Division. The resulting work Gwendulyn Gets Her Wish was premiered in April 2002, and will be performed in the Los Angeles public schouls as the cornerstone of a five year arts-in-education initiative.

Mr. Gandolfi’s Vientos y Tangos (2003) for wind ensemble, co-commissioned by a consortium of fifteen wind ensembles, in celebration of Frank Battisti’s seventieth birthday, is now published by Boosey and Hawkes as part of their Windependence Series. It has been performed worldwide and has received five recordings to date. In the summer of 2001, Mr. Gandolfi wrote music for the Shakespeare and Company’s production of a Midsummer Night’s Dream, under the direction of Tina Packer. A concert adaptation of that score, Themes from a Midsummer Night, was premiered at Jordan Hall in the fall of 2001.

His music has been recorded on the Deutsche Grammophon, CRI and Innova labels. He is a faculty member of the New England Conservatory of Music and the Tanglewood Music Center. He was a visiting lecturer on music at Harvard University in 2002, and held a similar position there from 1996-1999. He is listed in the New Groves Dictionary of Music and Musicians.